Our Best selection of Villas in the Region
Advanced Search

Villas in Brittany and Atlantic Coast of France

Brittany, France: things to see and do​

Brittany and some wonderful beaches and they are for everyone, so also ideal for families too. Whether you want to put up a sandcastle, take a sailing boat trip sighting dolphins, paddle boarding, sea kayaking, diving, surfing, – there’s so much to do in Brittany. Apart from the beaches, visit Saint-Malo port city which has a Cathedral in the centre of the old town. It is built in Gothic styles and features stained-glass windows portraying town history. Visit Limoëlou manor, former residence of the famous explorer Jacques Cartier. Don’t miss visiting this manor house, a moving testimony to its well-known owner. It’s a rare example of a great 16th-century explorer’s home. Jacques Cartier unlocked the North American continent to the French through the Gulf of Saint Lawrence. Nearby is La Demeure de Corsaire, an 18th-century privateer’s house and museum, which is worth’s a visit. There is an interesting story, that the government-sponsored pirates to use to raid the rich vessels that passed by here. While the inland woodlands have peaceful villages like Huelgoat and Paimpont to discover.

The farmers and fishermen still play a great part in the region’s economy (they say France’s best oyster comes from here). Oh! We almost forgot an edible delight which was born here, the home of the crêpe, don’t forget to try a few, equally sweet and savoury. Its delicious.

Saint-Père-Marc-en-Poulet, 10 mins drive south of Saint-Malo, was Built during the reign of Louis XVI to defend the pirate town of English attacks, it is famous today for hosting the festival La Route du Rock. Take a guided tour of Château de Montmuran, between Rennes and Dinan, it is a place full of history.

The Tour will shed some insight into the middle ages to modern times. It was built in the 12th and 17th centuries. Musée de l’Outil et des Métiers, sits by the side of the Ille-et-Rance canal, in the old wooden buildings built by the grain merchants since the end of the 19th century, the Museum of the Tool and Trades traces the work through tools and machines. The buildings of the Museum of Tool and Tinténiac Trades are divided into several spaces. Musée du Rail, is a pleasure for train lovers, which brings together both railway aficionados and model railway fans. There are many attractions in Brittany, but there few places you should never really miss when in Brittany. In Saint-Malo, you will soon discover it is a place for the foodies, from Patés and seafood, Le Mans’ specialty dish, rillettes, Breton‘s Cancale is renowned for its oysters, Concarneau, and Dournanez are the places to visit for sardines. Finally, the best scallops in Brittany are from the bay of St Brieuc: the traditional way of enjoying the scallops is soaked in a buttery cream sauce known as Coquille Saint Jacques.

Dinan is a Pretty town in Brittany. It’s known for its medieval ramparts, cobblestone streets, and half-timbered houses, Its geographical setting is ideal, the city overlooks the river Rance. The medieval town on the hilltop has many fine old buildings, some of which date from the 13th century. 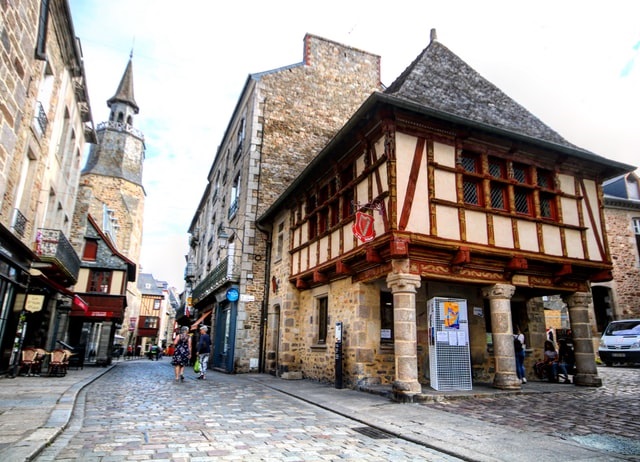 With its striking port and paved streets filled with art galleries and craft shops, it is worth a day of anyone’s time. Climb the 158 steps to the top of the 40m (132ft)-high Tour de l’Horloge for wonderful views over the surrounding area.

The adjoining Place du Guesclin is the site of the Thursday-morning market.

If you holiday in summer, do not miss the Fête des Remparts medieval festival each July, don’t confuse yourself with the Festival Interceltique Lorient, which is dedicated to showcasing the cultural traditions of Celtic nations around the world. This is the largest Celtic festival in the world, taking place from 4 – 13 August in Brittany.

When to visit Brittany & Dinan

From June to August, is generally warm; some days can be nice and warm, but cooled by lively afternoon breezes. The coolest part is the west coast. Visit any time between March and October. Since the tourist businesses is focused on its beaches and seaside retreats you should find things open all over. The busiest months are July and August, which is pretty warm; in case you are wondering if you need a wet suit to swim, then usually not, in south of Brittany especially, between around mid-June and mid-September.

All Sizes
All Types
All Cities
All Areas
Default
We use cookies on our website to give you the most relevant experience by remembering your preferences and repeat visits. By clicking “Accept All”, you consent to the use of ALL the cookies. However, you may visit "Cookie Settings" to provide a controlled consent.
Cookie SettingsAccept All
Manage consent